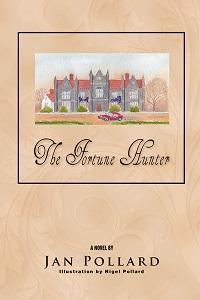 The Fortune Hunter proves that winning a lottery isn’t all it’s cracked up to be.

When the new lottery winner is announced, twenty-one-year-old Anna has won a fortune! She buys the Old Priory estate in Suffolk and all its contents. Her family joins her there, along with her older sister, Amanda, who aspires to become a model on the Paris fashion scene.

The previous owner of the Old Priory, penniless Lord Harry Charlesworth, decides to court Anna, in hopes of inheriting her newly acquired wealth. But there is another man in the picture who has really fallen in love in Anna. The gardener’s nephew, Josh, develops deep feelings for her while teaching Anna to drive. Josh is very suspicious of Lord Harry’s motives, knowing that he is unscrupulous. Josh tries to protect the unworldly Anna from Lord Harry’s sinister attentions, but is unable to prevent her from marrying him.

Working in Paris, Anna’s sister has heard tales of Lord Harry’s French mistress, but before she can warn her sister, Amanda dies from taking ecstasy at Anna’s engagement party.

Anna finds herself alone after returning from her honeymoon in St Lucia and Martinique. Her marriage proved a disaster, so she files for divorce. There is no one she can turn to when Harry comes looking for her with murder on his mind.

Jan Pollard lives in Derbyshire, England. This is her third novel and she has written six children’s books. Her book, Fly Eagle Fly, won an award.