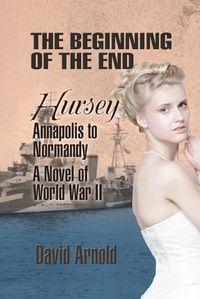 The beginning of the end:Hursey:Annapolis to Normandy:A Novel of World War II

The Beginning of the End continues the story of Reserve Commander Warwick Hursey during World War II, and is the third and final book of the series that began with Love and War and continued with Hursey in Conflict. This is a graphic and realistically told story of action at sea and romance ashore.

On his return from America, Warwick is appointed to command the light cruiser HMS Delhi and is employed escorting convoys to Murmansk, where his ship plays a part in the sinking of the German Battleship Scharnhorst. After escorting a fleet of landing craft to England from Gibraltar, he is posted to Camp Widewing, the huge U.S. and Allied Camp near London, which was planning for the D-Day landings. He observes and reports on the disastrous Operation Tiger, when over 900 American servicemen lost their lives.

Warwick eventually falls in love with Brigitte Ziegler, a Danish refugee. The book ends as the USS Augusta with General Bradley and Commodore Hursey onboard weighs her anchor for the D-day invasion of June 6, 1944.

David Arnold was born in 1939 and is a retired Royal Naval Reserve Commander. He has served on passenger ships, frigates, and nuclear submarines. He is an ocean yacht racing specialist navigator and holds a British Merchant Marine Certificate as Extra Master Mariner. His next book is about a woman who is torpedoed in the South Atlantic and her back story as she spends fifteen days in a lifeboat. He lives with his Australian wife of 47 years, Andrea, in rural Sussex, England where he was born.

The beginning of the end:Hursey:Annapolis to Normandy:A Novel of World War II