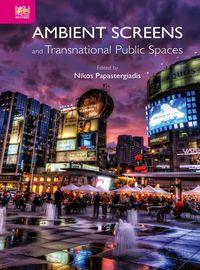 Large public screens have now become a ubiquitous part of the contemporary cityscape. Far from being simply oversized televisions, the media experts contributing to Ambient Screens and Transnational Public Spaces put forward a strong case that such screens could serve as important sites for cultural exchange.

Advances in digital technology spell the possibilities of conducting mobile modes of interaction across national boundaries, and in the process expose the participants to novel sensory experiences, giving rise to a new form of public culture. Understanding this phenomenon calls for a reconceptualization of “public space” and “ambience,” as well as connecting the two concepts with each other. This pioneering study of the impact of media platforms on urban cultural life presents a theoretical analysis and a history of screens, followed by discussions of site-specific urban screen practices on five continents. There is also a substantial examination of the world’s first real-time cross-cultural exchange via the networking of large public screens located in Melbourne and Seoul.

Nikos Papastergiadis is professor of media and communication at the University of Melbourne.