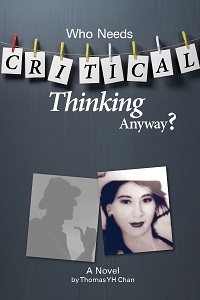 Sam, working as a trainee waiter in a small Italian restaurant near the West End of London, was one day fooled by a bohemian sort of man with a bad sort of logic that led to his dismissal by the head waitress. Feeling lost and trotting along Regent Street he bumped into his girl friend Amy who had just been through a similar scenario, and that made them both laugh away their ‘misfortune’ to start afresh. Sam decided to take a critical thinking course run by a certain Professor Panggloss, a name that rang a bell for him, recalling Voltaire’s famous novel Candide, and the course turned out to be very useful, albeit puzzling at times, which therefore troubled Sam quite a lot, so much so that he had to share his critical thinking problems with Amy, even when she was already away from the UK, holidaying at her aunt’s invitation in Hong Kong.

The lovers, separated by at least six thousand miles, carried on their intimate communication using state-of-the-art IT, frequently disturbing each other on account of a considerable difference in time, each waking up the other in the small hours! Amy, obviously enjoying herself in Hong Kong and meeting up with old friends and going to scenic places, did not forget her love’s academic problems. Indeed, she went out of her way to find answers for his puzzles, even going so far as to start a really lengthy discussion with her friends and new acquaintances in what is Hong Kong’s most popular hideout, the Amigo Café in Happy Valley. Back in London Sam strangely enough loitered around and ended up in front of what he perceived as a Sherlock Holmes Shop where he was greeted by a very friendly and lovely young employee who processed his application for membership to a strange sort of society, the Sherlockesque Detective Clique. At the next clique meeting that Sam participated in he found delight and insight for his appreciation of critical thinking, which he at once told Amy about, on the phone of course and again in the small hours!

Home at last, Amy told Sam about her lengthy and very revealing discussion with her friends in the Chinese Restaurant in Hong Kong’s International Airport. Sam found that very illuminating and both then appreciated critical thinking so much more than before. In the West End, surprisingly, Sam saw that bohemian-looking cheater and challenged him to pay for the meal that he consumed in that Italian Restaurant, upon which this man produced a dagger instead of a bank note. Recalling the last of the Thirty-six Stratagems Sam and Amy let that hooligan go, reserving for themselves the peace of mind, so that all’s well should end well.

Born into a fairly well-to-do family in Hong Kong (whose forebears had migrated down to South China from Manchuria), Thomas YH Chan grew up under British colonial rule and western education, going to a Catholic elementary school and then to a public school for his secondary schooling before going to college in Germany, studying initially Physics and Mathematics and then switching to Logic and Philosophy. After spending two years of student life at the University of Heidelberg in the then West Germany, Thomas returned to Hong Kong on his father’s advice to complete a bachelor’s degree programme in German Literature and Philosophy at the University of Hong Kong (HKU). Right after graduation Thomas took up teaching as a tutor at the Department of Philosophy at HKU and on completion of the two-year contract continued his graduate studies in Philosophy at the University of Vienna from which he graduated with a doctorate.

As a returned student from Germany Thomas shouldered the responsibility of liaising with and looking after visiting foreign students to HKU, particularly ones from continental Europe. This continued well into the early years of his academic career, first at HKU and then later on at the Hong Kong Polytechnic University (PolyU) where he served for twenty long years as a Professor of German and English, before taking up his current appointment as Head of Department of English at Hong Kong Chu Hai College of Higher Education, a local private university. In terms of language teaching Thomas has designed and taught courses in TESOL (Teaching English to Speakers of Other Languages) as well as in ESP (English for Specific Purposes), in particular Maritime English and Technical Writing for engineering students, owing largely to his science background and his interest in both technology and the fine arts.

Thomas got interested in the magic of words and literature at an early age and as an undergraduate soon began to write articles for the HKU student newspaper while serving at the same time as the newspaper’s secretary and assistant editor. He also contributed articles to local newspapers, most of which were on literary and philosophical issues and themes. As a graduate student at the University of Vienna Thomas had the opportunity to acquaint himself in-depth with European visual art and come to appreciate it, so much so that even today he is still giving lectures and designing courses on Western Art and Culture for his students.

To date, Thomas has written two novels, the first one on logic and critical thinking, basically for his students, titled Who Needs Critical Thinking?, the second one on European culture, in particular visual art in Germany and Austria, titled Journey to the West: Searching for Love, Intellect and Art History. Thomas is currently working on his third novel with today’s Russia as background, while busy organising cultural activities between Hong Kong and Western Europe.